Frank Lampard is hoping France allow N’Golo Kante to sit out the international break in order to work on his physical condition.Kane’s start to the season in west London has been beset with injury.​ The midfielder played with an injection in his knee during the Europa League final at the end of May and he subsequently spent much of the summer in rehabilitation.Lampard was without Kante for almost all of pre-season but brought him back to the bench for the opening game of the season against Manchester United. Kante came on against United and injured his ankle, but played through it during his side’s Super Cup match against Liverpool and a home league game against Leicester City. Article continues below Editors’ Picks What is Manchester United’s ownership situation and how would Kevin Glazer’s sale of shares affect the club? Ox-rated! Dream night in Genk for Liverpool ace after injury nightmare Messi a man for all Champions League seasons – but will this really be Barcelona’s? Are Chelsea this season’s Ajax? Super-subs Batshuayi & Pulisic show Blues can dare to dream However, Kante was forced to sit out Chelsea’s 3-2 win at Norwich City on Saturday.World champions France face Albania and Andorra in Euro 2020 qualifiers in a fortnight, but Lampard has called on Les Bleus manager Didier Deschamps​ to allow Kante to stay at Cobham Training Ground. “It is a difficult one. He has had four years of constantly playing,” Lampard said at Carrow Road. “[The] injury from the Europa League final has affected his pre-season. Then he hurt himself against Man United.”We are trying to get him through it. Today was too painful. The international break will be great for him to get the injury right. It would be great for everybody [if Kante stays] because he’s been playing game after game after game.”Lampard’s plea also means Kante is in doubt for Saturday’s match against Sheffield United ahead of the upcoming international break.The Chelsea boss then admitted that Pedro is doubtful for Sheffield United next week, but he was more optimistic about Mason Mount, who got a knock in a goalscoring performance against the Canaries.The 20-year-old’s goal and Tammy Abraham’s double saw Lampard earn his first win as Chelsea manager after four games in charge of the club.Though the youngster has yet to make his England debut, he has previously been called up by Gareth Southgate.​ Lampard believes his young attacking midfielder is good enough for England and hailed him after yet another positive display.”It is Gareth’s shout,” Lampard said of Mount’s inclusion for England. “I would hate to second guess or have a headline to say what his squad should be. He’ll watch games. I know that they know a lot about Mason. 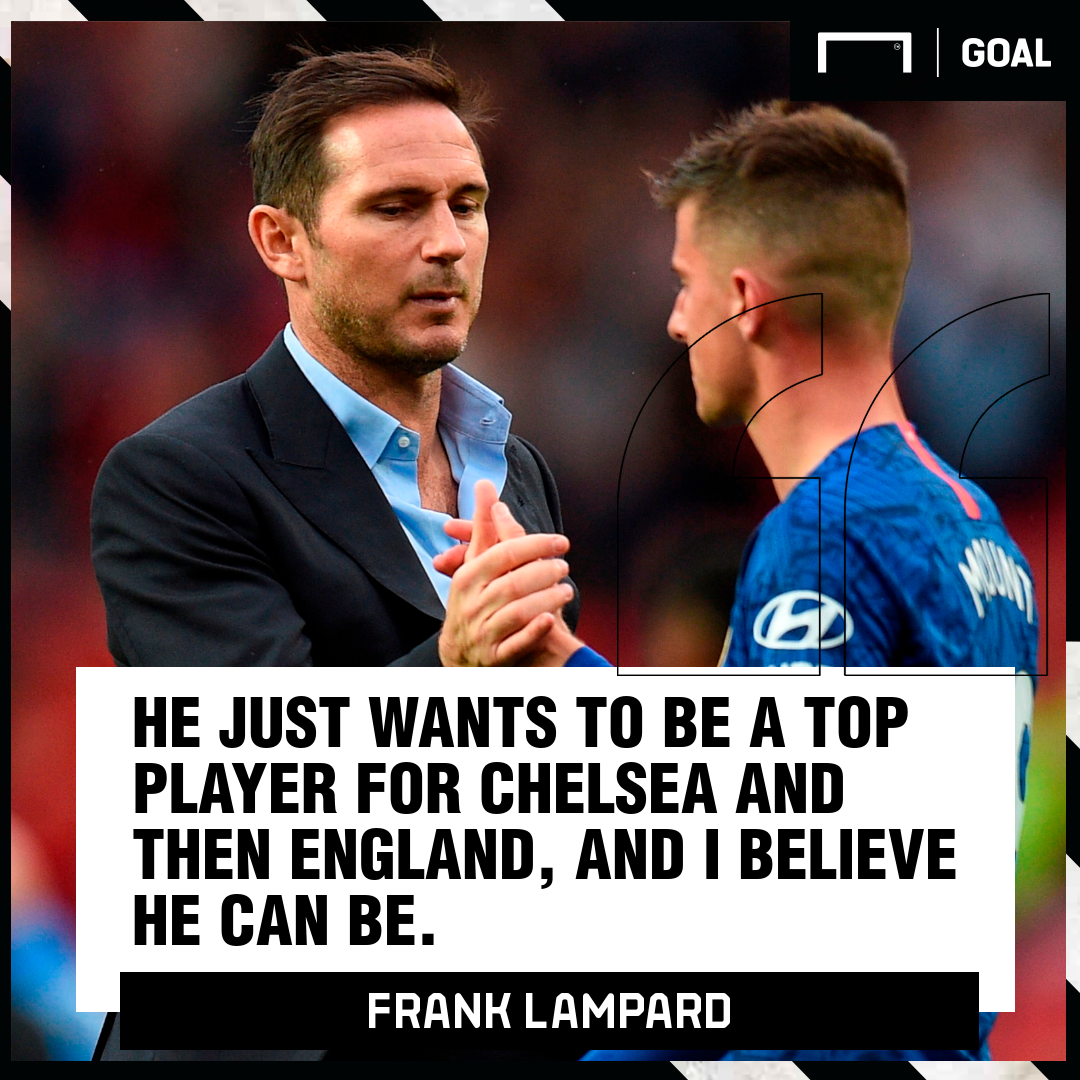 “I’ve said it a lot last year. Being called up for his country, that’s hopefully going to come pretty soon again. He can go absolutely to the top. He’s impressed me. He had another step on in pre-season.”At Derby, he was great. But that’s one thing. Coming to Chelsea, with the competition he’s got in midfield and the expectation level that comes with it, is another thing. I keep going on about his character.”For me, it’s such a big percentage of the package and he has all of that and he has the quality. Intelligent players who have that talent are really great to work with. I don’t want to heap expectation on him.”But I will tell him that every day because I feel it, and when someone’s humble and hard-working like him, it doesn’t matter. You can tell them because it will never stop his drive or his hunger.”He’s not a boy that wants the razzmatazz of it all, he just wants to be a top player for Chelsea and then England and I believe he can be. It certainly helps but he’s driven and he’s not going to get carried away with himself.”It’s the way his family have brought him up. He is a pleasure to work with.”England announce their squad for the September international break on Thursday. Check out Goal’s Premier League 2019-20 fantasy football podcast for game tips, debate and rivalries.

Scotland’s bid for automatic qualification to Euro 2020 is all but over after they were outclassed by a Kevin De Bruyne-inspired Belgium, who ran out 4-0 victors at Hampden Park.The Manchester City midfielder made goals for Romelu Lukaku, Thomas Vermaelen and Toby Alderweireld in the first half before claiming a deserved one of his own late on as the Group I leaders ran riot against Steve Clarke’s team.Scotland are at least guaranteed a place in the play-offs in March after winning their Nations League group, but there is much work for new boss Clarke to do before then. Article continues below Editors’ Picks What is Manchester United’s ownership situation and how would Kevin Glazer’s sale of shares affect the club? Ox-rated! Dream night in Genk for Liverpool ace after injury nightmare Messi a man for all Champions League seasons – but will this really be Barcelona’s? Are Chelsea this season’s Ajax? Super-subs Batshuayi & Pulisic show Blues can dare to dream Belgium, meanwhile, lived up to their status as the number-one side in the FIFA rankings as they maintained their 100 per cent record in the group.Clarke made four changes to the team beaten by Russia on Friday and his side began purposefully only to find themselves behind within nine minutes following a devastating demonstration of counter-attacking at its best from the visitors.Dries Mertens set De Bruyne away down the left channel and he drove towards goal before picking out the onrushing Lukaku at the far post and, with time and space to compose himself, the Inter Milan forward made no mistake.Our first half goal scorers. And tonight’s king of the assist. #SCOBEL #EURO2020 #COMEONBELGIUM pic.twitter.com/oZ1BYKhIUc— Belgian Red Devils (@BelRedDevils) September 9, 2019The outstanding De Bruyne once again was the provider in the 24th minute, bending in a superb cross which Vermaelen flicked home.It was next the turn of another Belgium defender, Alderweireld, to make it three eight minutes later when he took advantage of slack marking to head De Bruyne’s cross in off the underside of the crossbar, capping a disastrous first half for the home side.It was still Roberto Martinez’s team who looked the more likely to add to their advantage, with De Bruyne and Alderweireld spurning chances before the former got the goal his efforts deserved, curling in with eight minutes left after being found by Lukaku.What does it mean? Belgium virtually assured of top-two finishA comfortable victory at Hampden Park left Belgium with six wins from six and on course for a top-two finish.Scotland, above only San Marino in the six-team group, know they at least have the cushion of the play-offs.De Bruyne back to his best His performances so far this season for Manchester City have already suggested De Bruyne is returning to the peak of his powers and there was yet further evidence here in what was a world-class display from the Belgium international, who provided three assists in the first half alone before scoring a deserved goal. Lacklustre defending a real concern for ClarkeLosing to the world’s number-one ranked team is no disgrace, but what will have infuriated Clarke is the ease with which his Scotland side gave goals away. They lacked defensive discipline, failing to track runners and allowing their opponents too much space from set-pieces.Key Opta facts- Scotland have lost three consecutive competitive games for the first time since March 2013 (four in a row).- Under Martinez, Belgium have won all five of their matches against British sides by an aggregate score of 14-0.- Vermaelen scored only his second international goal for Belgium and first since November 2009 versus Hungary – 3586 days ago.- De Bruyne has had a direct hand in seven goals in just four games versus Scotland (two goals, five assists).- Lukaku has scored four goals in his three international appearances against Scotland, finding the net with four of his six shots on target.What’s next?Scotland travel to Russia next month and a second-half caution for a challenge on Mertens means Scott McTominay will be suspended for that game. Belgium host Group I’s bottom side San Marino. read more