A total mess! Even West Ham are too good for abysmal Man Utd

Where does Ole Gunnar Solskjaer go from here?His team’s winless streak away from home in the Premier League stretches to seven following this dismal reverse at West Ham.Whatever lustre conjured by the once-mighty Manchester United name is long gone. Article continues below Editors’ Picks Ox-rated! Dream night in Genk for Liverpool ace after injury nightmare Messi a man for all Champions League seasons – but will this really be Barcelona’s? Are Chelsea this season’s Ajax? Super-subs Batshuayi & Pulisic show Blues can dare to dream Time for another transfer? Giroud’s Chelsea spell set to end like his Arsenal career Solskjaer’s team are a complete mess.Granted allowances must be made for the absences of Paul Pogba, Anthony Martial and Luke Shaw but all teams suffer injuries.What lies beneath the surface, when United have to draw on their squad, is pitiful and not fit for purpose. Then again, they hardly pull up many trees with their first XI either.They may have got their second league win of the season last week against Leicester at home but that had more to do with how the visitors wilted in the expectation that they would take care of business.That win, given to them by a penalty converted by Marcus Rashford, papered over the cracks at the club.Here, against West Ham, they got exactly what they deserved in a 2-0 loss. There was no punch, no verve and the distinct lack of a plan. They beat Astana, narrowly, in midweek. That’s currently about their level. West Ham are too good for them.They had what United didn’t; a busy midfield, a lively attack line and a striker who knows what he’s doing in Sebastien Haller. 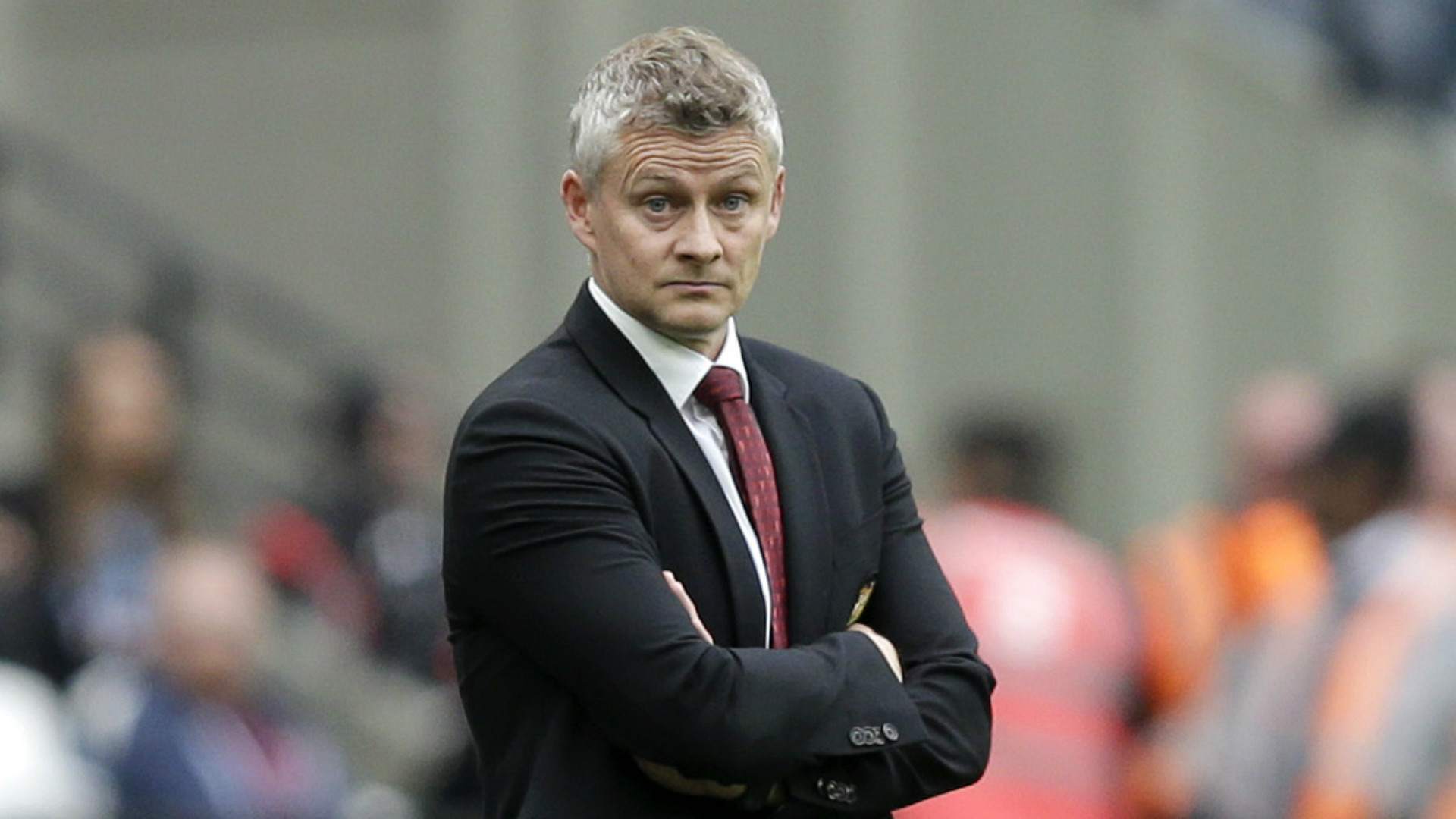 Rashford will probably not be available to Solskjaer in the immediate future either. The England striker pulled up with what looked like a pulled muscle during the second half, chasing what was another aimless ball into the channel.With Romelu Lukaku sold to Inter, and scoring in this weekend’s Milan derby, the striking burden was scheduled to be rotated between Rashford and Martial.The Frenchman is himself injured with no certain return date. United are lacking firepower at a time they need it most. The wisdom to get rid of Lukaku can be legitimately questioned.Solskjaer had few senior options for the midweek Europa League game so Rashford played there as well. A concern for Solskjaer is how to manage the workloads of his two strikers now that both are proving vulnerable to knocks and strains.Jesse Lingard came on for Rashford here, demonstrating the paucity of the club’s forward options. He barely attracted a passing glance during his minutes on the pitch.The only one who looked anything like an attacking threat was again Daniel James. His pace will cause trouble for any team but he is suffering from a severe lack of help.All over the pitch, United were second best. Harry Maguire, so surefooted in the win against Leicester, was all at sea early on. He, like Victor Lindelof, was cursed to lose almost every header on the day to the impressive Haller.It was the Swede who played Andriy Yarmolenko onside for the opening goal and Maguire failed to get close enough to prevent the shot.Maguire’s passes on occasion put his own midfield under pressure and one ill-advised dribble in the first half caused the concession of a corner.It’s not often Aaron Wan-Bissaka gets criticised but here his positioning was at times suspect, allowing West Ham to canter in behind.Ashley Young embodies the right qualities but would not be a starter in many more top teams. It was his foul on Mark Noble which ultimately coughed up the second goal.In midfield, Nemanja Matic was ponderous having captained the side on Thursday. Alongside him, Scott McTominay huffed and puffed but is hampered by a lack of technical quality.Juan Mata missed the one good chance that came his way and is not the optimum player for this kind of team. Andreas Pereira is a fish out of water playing wide on the right of midfield.It’s frankly stunning that Solskjaer saw fit to name the same XI for this game as he played against Leicester last week.This is a results business of course and United got one there. But there is no pervasive method about this team, no joined-up quality, no cohesiveness.What brings it into all the starker contrast is the realisation that Manchester City put West Ham away a matter of weeks ago by a 5-0 scoreline.By the time Aaron Cresswell curled a sumptuous free-kick into the top corner, the Manchester United fans were streaming out, the distant away end emptying fast. They had seen enough.Solskjaer’s winning streak is now as distant a memory, the false dawn of all false dawns. Check out Goal’s Premier League 2019-20 fantasy football podcast for game tips, debate and rivalries.

TSX in solid advance as 2014 trading winds down

TORONTO — The Toronto stock market registered a solid advance Monday, building on gains racked up last week in the wake of stronger than expected economic growth numbers from Canada and the United States.[np_storybar title=”Five investment themes for 2015 and beyond” link=”https://business.financialpost.com/2014/12/27/five-investment-themes-for-2015-and-beyond/”%5DDavid Kaufman: Since this is the season for prognostications, I thought I would make a few of my own as this is my last column for 2014. But rather than attempting to predict specific events or pick specific stocks that will be winners in 2015, here are five macro themes that you might want to watch carefully next year — and beyond. Keep reading. [/np_storybar]However, the S&P/TSX composite index was off session highs as energy stocks and oil prices lost early momentum. The main Toronto index was down from a 122-point gain to close up 54.67 points at 14,663.92. The Canadian dollar dipped 0.05 of a cent to 85.99 cents US.New York markets were mixed, with the Dow Jones industrials down 15.48 points at 18,038.23, while the Nasdaq inched up 0.05 of a point to 4,806.91 and the S&P 500 index added 1.8 points to 2,090.57.The TSX is on the way to a gain of around eight per cent for 2014, with the market getting a lift of one per cent last week after data showed Canada’s gross domestic product rose by 0.3% in October, beating economists’ expectations of 0.1% growth for the month.And in the U.S., GDP growth figures for the third quarter were revised upward to five per cent from a previous figure of 3.9%.The data reassured markets that the United States continued to be the major prop for the global economy against a background of slowing growth in China and a still tentative economic recovery in Europe.The American data is a big plus for Canada as a surging U.S. economy benefits Canadian exports and, in turn, provides lift to the TSX.Could oil’s nosedive be the shock that will finally brings global stocks back to earth?The biggest investing winners in 2014: India, Amaya Gaming, coffee and moreAn advance of about eight per cent on the TSX would be down sharply from a 15% surge at mid-year. But that was before oil prices started to slide. They now are down 50% from summer highs amid a huge increase in global supply and lower demand from economic weak spots like China and Europe.Energy stocks have been heavily punished along with Toronto’s energy group, down about 16 per cent year to date, while traders wonder how low crude oil prices can go. Prices plunged to levels in the mid-US$30s after the 2008 financial collapse. But Brian Belski, chief investment strategist at BMO Capital Markets, notes that those prices occurred during a global recession and such a drop now would be too drastic. “There‘s going to be a lot of volatility in the world going forward . . . so I think you need a period of digestion,” he said, adding that it’s hard to say whether the bottom will be in the $40s or $50s.“You need to start seeing more humble forecasts and again, going back to good old-fashioned investing. When we get to a point where energy companies aren’t over promising and under delivering, that’s when they will be attractive again.”The TSX energy sector slipped 0.3 per cent as February crude in New York erased early gains to slide $1.12 to US$53.61 a barrel. Prices had been higher during the morning on reports of a fire affecting oil storage terminals in Libya.However, most other sectors advanced with the base metals group ahead 0.55% as March copper rose one cent to $2.82 a pound.The gold sector was also up 0.4% even as February bullion dropped $13.80 to US$1,181.50 an ounce.Outside the resource sectors, financials and industrials climbed 0.55%. read more